Although their logical reasoning skills are undeveloped, young children can argue and express opinions. Parents should encourage them. Even though a child’s argument will tend to be based on emotion, the practice can help build a critical perspective and confidence.

Despite the fact that young children may not be able to grasp logical concepts, they still employ everyday forms of reasoning in both their use of language and in problem-solving and decision-making. It is from out of these capacities that critical thinking can begin to develop at this age.

As is readily apparent, communication via language is not logical. Natural language does not conform to a formal logical structure. It is contextual, whether we are talking about comprehension or expression. If someone says: “If I had a knife, I would cut my steak,” most people would understand that having a knife makes it possible to cut the steak. However, in formal logic, the sentence means that if I had a knife, I would be obliged to cut the steak. Logical language is systematic and obligatory. But a child learns to speak and to understand in a pragmatic and contextual, not logical, fashion.

Certain communication problems are caused precisely by an overly rigid logical rigor, as in the case of people with Asperger’s syndrome, a type of high-functioning autism. Paradoxically, human communication only works because it is not a purely logical linguistic system. This is one of the reasons why automated translation between languages has been a thorn in the side of artificial intelligence experts since the 1970s.

Most real-life problems that we have been grappling with since infancy cannot be formally resolved by logical deduction.

Decision-making is based on a complex mix of different elements:

This is how a child can choose between two toys or how an adult chooses between buying and renting an apartment. People with ultra-logical cognitive tendencies won’t have enough factors for their reasoning to work with, and may be incapable of making a decision—and therefore, incapable of taking action. Neurological studies, since those undertaken by Antonio Damasio in the 1990s, have shown us that decision-making processes and emotional processes are intimately linked, from both neurophysiological and behavioral perspectives.

Pure logic, besides often producing unfortunate results in the real world, can be a hindrance in a highly complicated universe where decisions require managing multiple factors. This is the main reason why artificial intelligence is only now starting to see results, despite the fact that information technology has been in use since the 1940s.

Computer engineers have needed to overcome their grounding in logical, mathematical, and hypothetical deduction, and to incorporate developments in cognitive science and neurology. Algorithms now operate more like children: they make random decisions, analyze and memorize the outcomes in order to progress, and then correct themselves by discerning both the invariables and the contextual variables. This is called deep learning.

Children cannot rely too heavily on logic, but they are still able to express opinions based on their experiences, intuitions, and emotions.

This is also how children between five and nine years old operate. They solve many problems and make many choices, without being able to demonstrate (in the purest sense of the word) why their conclusions and choices were correct.

Between the ages of five and nine, therefore, children cannot rely too heavily on logic, but they are still able to to express opinions based on their experiences, intuitions, and emotions. To do this, they need to practice, have good self-esteem, and feel esteemed by others in order to believe they have the right, the desire, and the energy to put their critical thinking to use: in other words, to exist as a thinking and acting subject whose capacities are recognized by others.

At this age, children are able to argue based on things they have experienced and knowledge they have acquired at school or at home, from books, television, or the internet, or by talking with their friends. They are also able to argue with their “heart.” They assume that their emotions are arguments themselves.

For example, a child might consider that we shouldn’t eat meat because innocent animals shouldn’t have to die. The child’s empathy is the crux of their argument and the strength of their insistence will often be proportional to that of their emotions.

We show children from this age group a drawing of a rectangular flask tipped at an angle, and we ask them: “If I fill this flask roughly halfway, could you draw the water line on the flask?”

What would be the result? Most children will draw a line perpendicular to the flask’s longitudinal axis. Yet, since this axis does not run vertically but, rather, is at an angle, the line the child draws is not horizontal relative to the ground, as it should be.

Children err here because their minds are referentially anchored to the flask, just as astronomers for many millennia were fixated on the idea of the earth, and later the sun, as a reference point—before realizing that the universe does not have an absolute reference point. 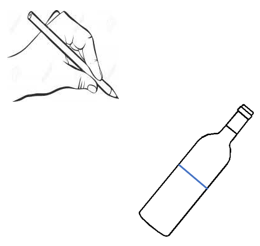 Even if we explain the error to children—and they say they understand—many will, shortly afterwards, make the same mistake again. Their cognitive system is not mature enough to incorporate the logic behind reference and relativity. The example shows how logical thinking is not natural, but requires a learned ability to step back and remove oneself from immediate engagement with a particular situation.